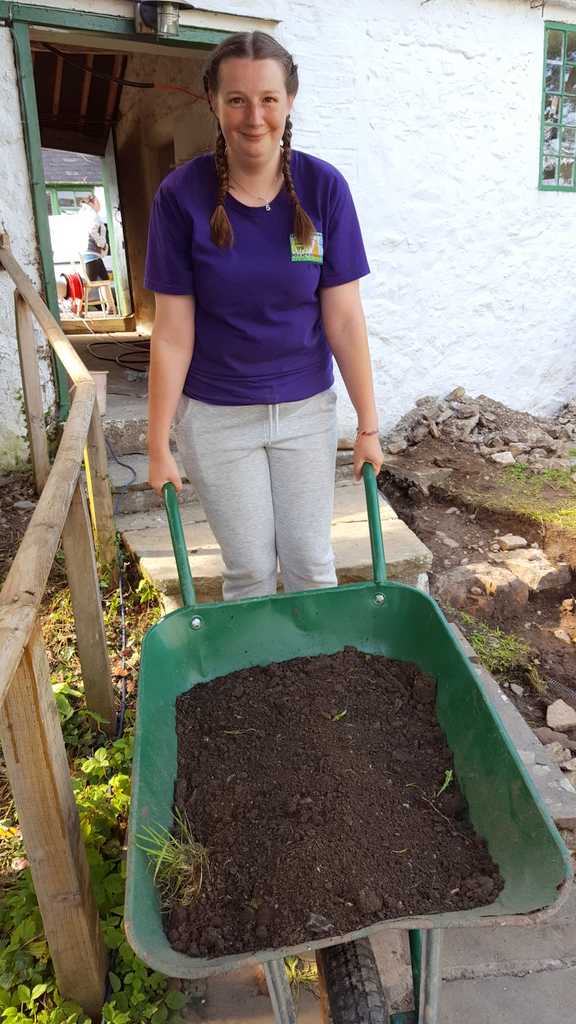 And she wheeled her wheelbarrow Aug 2019

Whilst the major works will be done by professionals, there will also be Work Camps, which have been the traditional method of tackling smaller maintenance tasks on Pardshaw Quaker Meeting House and Hostel. 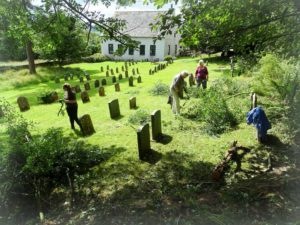 Working, living and eating together has been great fun, very satisfying and has forged life-long relationships. Work camps have usually been held for a week in August, but we expect this to increase as the development proceeds.

To get a flavour of a work camp, read the two accounts of the August 2019 work camp below the pictures. 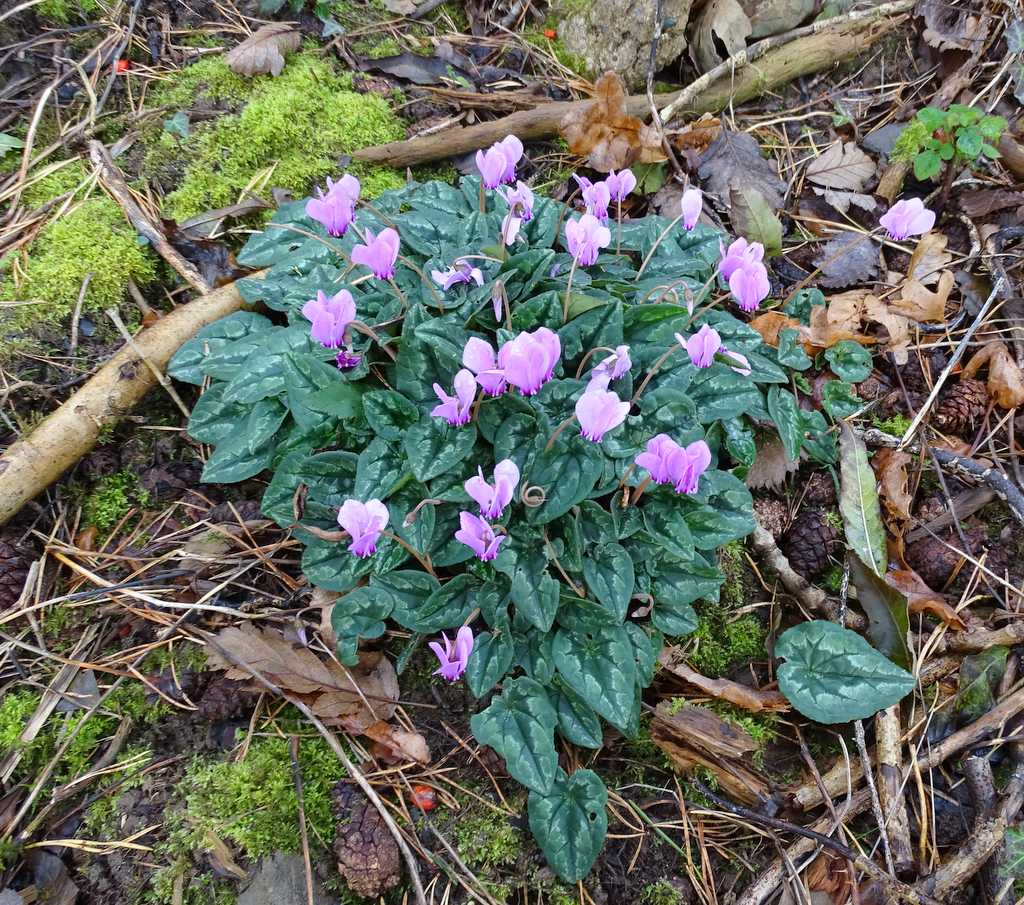 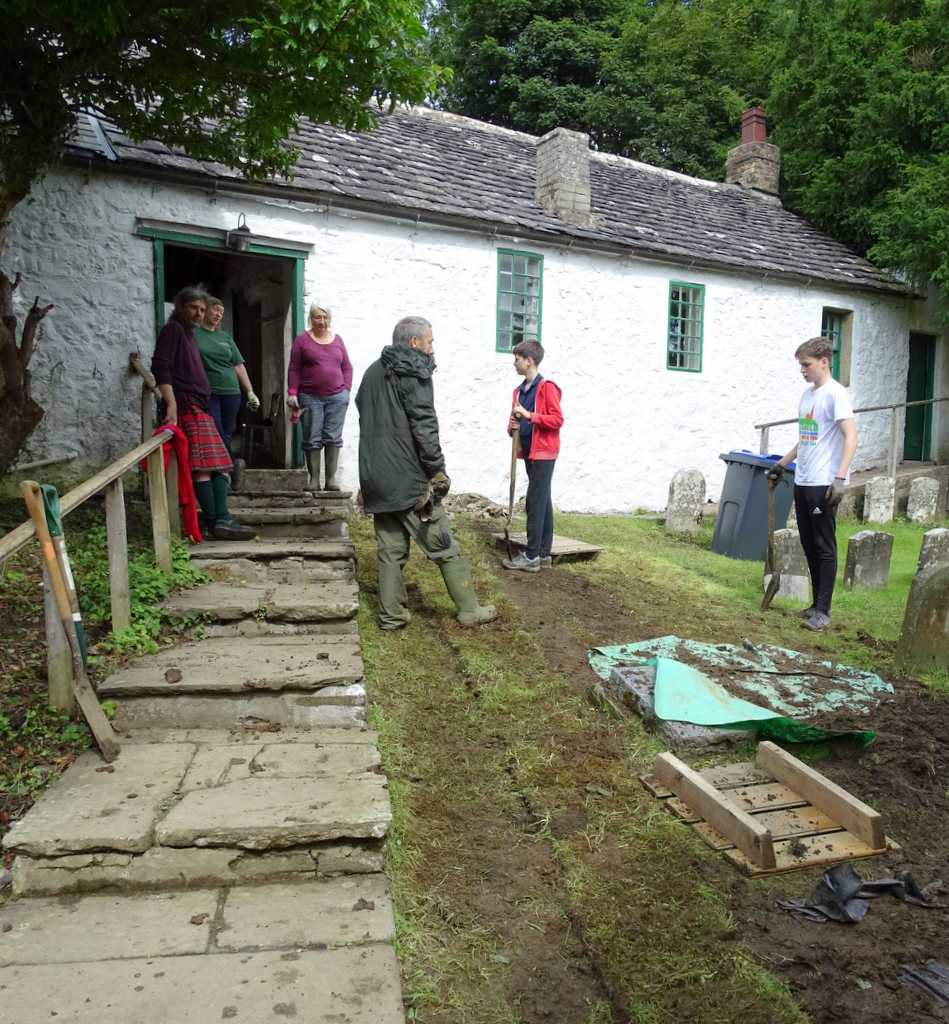 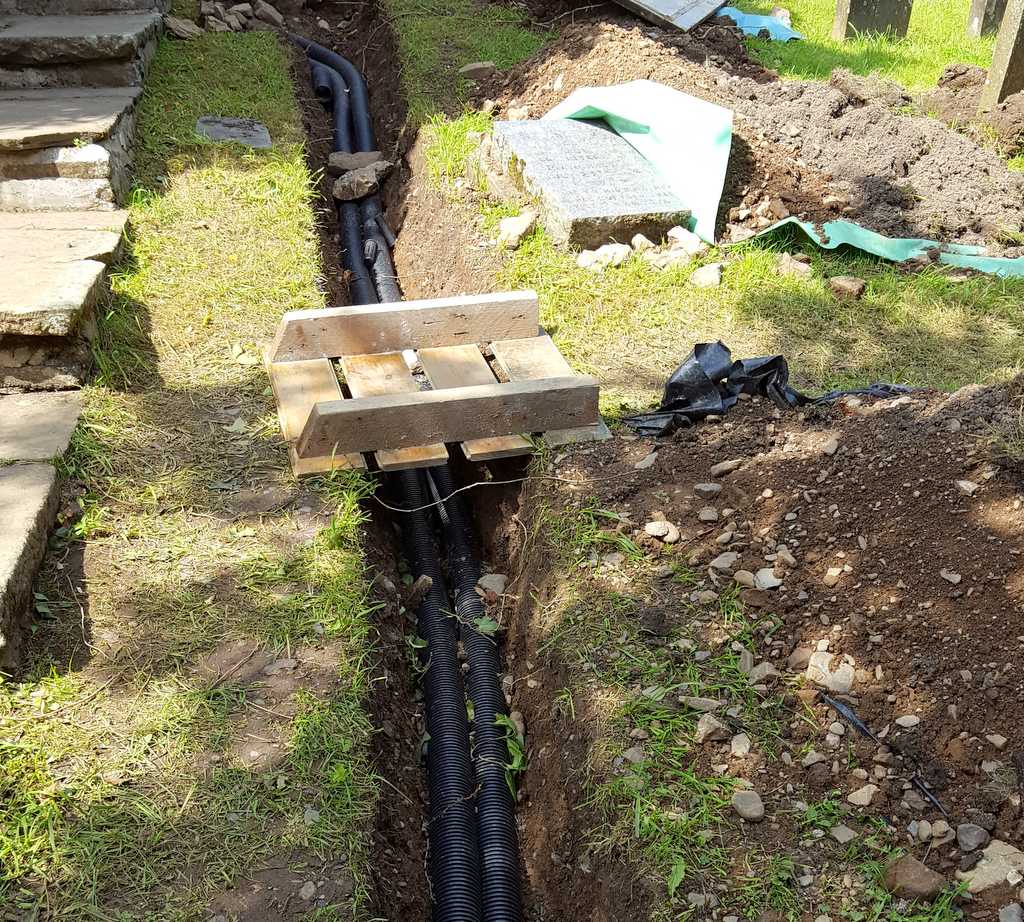 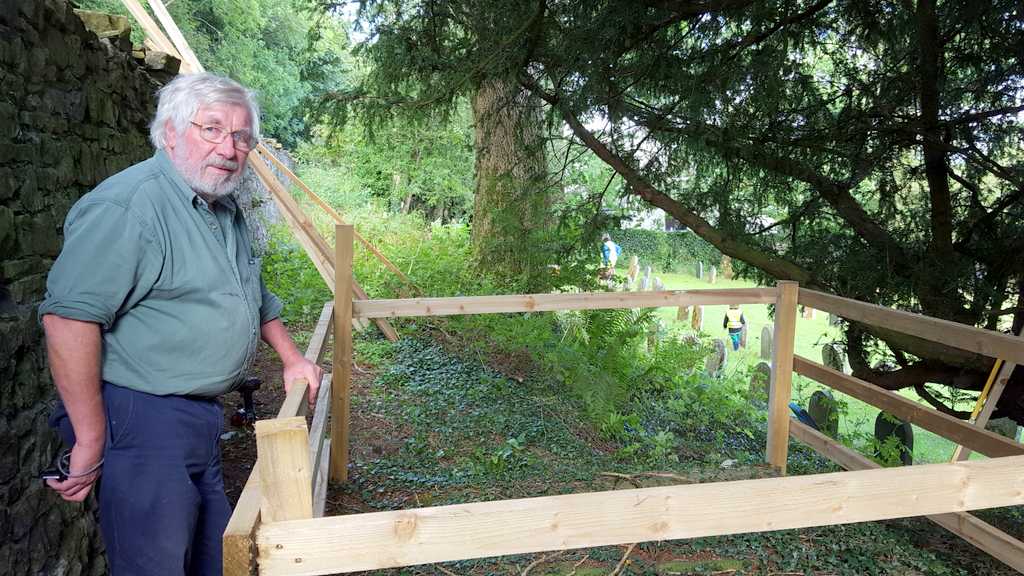 “On your own? A bicycle?” The agent for a Scottish travel company sounded incredulous and I was about to abandon my search for space, hills and air when I spotted an ad in the Quaker magazine, ‘the Friend’. A workcamp to restore an old Meeting house in the Lake District sounded enticing, and the warm response to my enquiry set me off to book my bike on to a long train journey.

Pardshaw Hall is a hamlet near Pardshaw four miles outside Cockermouth, and a Quaker Meeting House has existed here since 1650, though the present one (not quite the oldest in the UK) dates from 1729. Weekly Meeting for Worship (MFW) ceased in 1923, although a monthly MfW still takes place, and on Christmas Day. The imposing white buildings of the stables, old school house, and large square building that houses small and large meeting rooms, nestle along a road between hills and steep crags. It is said that George Fox preached at least twice from the top of these crags which have an excellent acoustic.

The group who greeted me warmly have special bonds, being mostly friends of long standing from their youth, attending Young Friends gatherings at Pardshaw and, later, work camps for essential maintenance there. The buildings had also been used as a basic hostel, but had in recent years fallen too far below legal standards to be offered to the public until basic requirements are met. However, that was all changing as the workcamp progressed because fire alarms, smoke alarms and emergency lighting were being installed, and an electrical distribution upgrade was being completed. While Rowan and Dave supervised and managed installation of modern, eco-friendly electrical systems, Chris and Catherine got on with general clearing and cleaning, Hazel and Audra cooked in between helping Rowan, William and Graham. Later we were joined by Kenny while Dawn breezed in and cheered us all up after a miserable day of the wettest kind of rain that only the English countryside can offer.

I focused upon clearing the massive gardens overgrown with brambles and ivy; I delighted in being in such a quiet, serene space, watched by hills which, chameleon-like turned from pale green to bluey-green as sun began to fade. Chopping, lopping, tugging, digging, little by little, with help from Graham and Chris, form and shape were revealed, with flowering vetch, roses and lords and ladies plants. Ivy, for all its picture-postcard associations with quaint houses, is a pernicious smothering creeper. Pulling it up is like unraveling a ball of wool, one layer leading to another, then another, endlessly, so imagine my joy when, beneath the final layer appeared the coiling tendrils of a budding cyclamen, struggling to burst into flower beneath the weight of all those dark green leaves.

The camp coincided with Hiroshima Day so we made sure to hold a special commemorative Meeting for Worship that morning to respect the time of the first atomic bomb, 8.45.
I understand this group has a year in which to convince the Area meeting of their vision to restore the place in to a viable hostel, with disabled access, as well as being a venue for local activities and larger gatherings, conferences etc. For myself, the vision is very sound, holding great potential for the future, and I plan to spread the word as widely as possible, among wheelchair users, walkers, families, and cyclists.

Not Quite a Lake District Holiday
by William Waddilove from Coventry

I have been following the ups and downs of Pardshaw, which is on the edge of the National Park just 4 miles outside Cockermouth.
Over the years the use by Young Friends diminished and it was only being used for a monthly meeting for worship. Local Friends were wondering what to do with the premises when a group of Pardshaw-lovers took the matter in hand and established a Pardshaw Development Group.

They realised that with some basic improvements it could become more usable for the community.

In that spirit some work plans were drawn up and the work camp organised. That is where I came in. Of the big jobs, the most technical was the installation of an up-to-date fire alarm system and extend the electrics to give proper power to the stable block, still with the stalls framework in place and converted to a shower room and the school room.

Before I arrived I had seen the results of a local advance group who had dug a trench for the ducting that would carry the cables from the main Meeting house to the school room. That party had come to a stop when they met a buried stone wall and a concrete path. That seemed a good job to tackle so it took my big stone cutter and heavy drill and made a channel for it and through the path and the wall. At the lower end of the trench it was a bit easier and I only had to drill some big holes and chip a little off one of the granite blocks in the wall! When the trench is filled in and the grass grown all the work should be almost out of sight and very tidy. Certainly Rowan the electrician was pleased with the work and its tidy appearance.

Another of my jobs was to build a fence around the open soakaway pit.

Over the 10 days there will have been 20 people involved and others, besides helping me and Rowan, did a lot of garden tidying, cleaning and repairing windows, fitting some units in the kitchen and cleaning the meeting house as well as clearing drains. The site is sloping so if they are not careful rain comes off the road and flows though the top entrance passage and eventually into the meeting house foyer!

But a good time was had by all. Food was always interesting and made especially so with a number of various diets but featured a lot of fruit and salads.

Would I go again? Yes a lovely crowd to work with in a pleasant relaxed way. So Friends watch it develop and you might like to go and stay there?

OTHER QUAKER CENTRES IN THE NORTH WEST


Please join us or make a donation